The Future of Newspapers and Broadcast is Connected TV 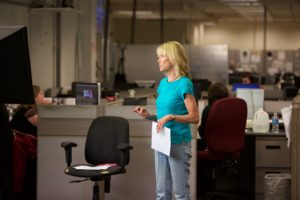 Broadcasting news breaks from a newspaper

Of all the organizations that are jumping on the OTT bandwagon, you might not expect to see newspapers. Yet that is precisely what is driving innovation at Calkins Media, a legacy media company with new media ambitions: hence Calkins Digital, which advocates video streaming for local media companies to “remain relevant”.

“At the end of the day everybody needs local news,” explains Guy Tasaka, Chief Digital Officer at Calkins Media. “The great experiment at Calkins is how to transform a print newsroom into a local media company with text, video, audio integrated into any platform.”

A short four years ago, Calkins was primarily print. Then they started to invest in teaching their people video production skills: arming reporters with iPhones, and training them to shoot and edit. Calkins started offering reporter videos, cooking shows, newsroom updates, and the occasional news show “package” – all sponsored. Comcast has included Calkins Media videos on its local Xfinity On Demand service.

But Jai Vyas, Calkins’ Director of Digital Innovation and Strategy, says VOD assets are important, yet hard to monetize.  “Linear has more credibility because it has been so successful for so many years.  Our analytics show the average viewing session for linear video is one and a half to two hours, compared to two minutes for VOD.”

Linear channels are not an easy task for newspapers to undertake, without a broadcaster’s knowledge and equipment. “That’s when we identified TelVue, about three years ago, when we started to evangelize linear video feeds for our news operations,” says Tasaka.

Vyas says it was impossible to ignore the spectacular growth of video consumption. “All the data says that is the direction to go in.  For us, TV solves the readership problem.”  Yet, Calkins didn’t want to go into the hardware business, and for them TelVue’s Virtual HyperCaster was the solution.

The Virtual HyperCaster is a cloud-based broadcast server that includes all the linear scheduling and content management tools of the regular HyperCaster, without the need for  broadcast hardware on the client premises.  Everything is managed in TelVue’s Hosted Broadcast cloud.

Tasaka’s advice to anyone who wants to introduce new technologies to a legacy operation? “Any legacy company, no matter how forward-thinking, will get sucked under by the day-to-day grind, and won’t be able to look forward.  You have find things that don’t exist. Take a lot of arrows.  Duct-tape a lot of solutions together.  Identify trends and opportunities.  You need a strategic GPS.  We showed the publishers and general managers and built a culture of experimentation and innovation. Our newsrooms never asked for it.  Don’t wait til they ask.  Give it to them and let them experiment.” 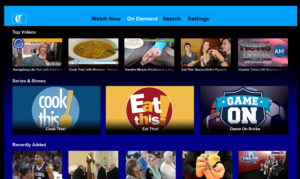 Within the past year, Calkins has launched fifteen OTT channels that deliver hyperlocal news to the home TV: The Bucks County Courier Times, Wochit, and WWSB, all of which are available on Roku, FireTV, and Apple TV. There are plans to launch more linear channels from Calkins’ Philadelphia properties.

Says Tasaka: “We don’t position ourselves as a media tech company, we position ourselves as publishers and broadcasters with awesome technology.  We have presented to broadcasters much larger than us and the feedback has been, ‘You’ve anticipated and solved problems we haven’t identified yet!’ Being broadcasters and publishers in the OTT space helped us figure out branding, marketing, cultural issues. You can build as much tech as you want, but it’s about understanding what goes on in the building.”