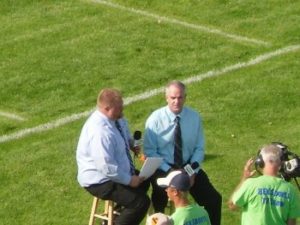 At TelVue we often talk about how high school sports can differentiate a local TV operation from its national competitors. At BEK Sports, they prove it. Every day. With a vengeance.

In the last school year, BEK Sports televised – LIVE – 200 games in 200 days from 55 cities in North Dakota. That averages a game a day, across a state that covers nearly 71,000 square miles. And BEK Sports does this with a full-time staff of six, and a fleet of two live production trucks.

How do they do it, and more importantly, why? Read on…

About seven years ago, BEK Communications, a triple-play provider, was looking for a way to make its new TV service more competitive. So BEK polled its customers, and 33% said the number one reason they would take the service was local sports. Thus, BEK Sports was born.

Jordan Hassler, now the Broadcast Operations Manager for BEK Sports Network, is convinced that local sports programming is a winner. “Sports are important on many levels: as a community event, a social event, people getting connected to the community. The value of a channel as whole is incredibly important, but when you have two teams it grows exponentially.”

BEK Sports started off with the nine high schools in its own area. Being a radio sportscaster himself, Hassler insisted on quality production standards from the outset. Each game is covered by 4-5 cameras, often manned by volunteers (they train these volunteers on-site one and a half hours before each game). The announcer and director are pros. “The product is produced on site and leaves the site 100% fully produced. In high school sports you have to do quality. There is no-one out there creating the quality and quantity we create.”

And it’s not just high school sports. BEK recently televised a live horse auction that was #1 in viewership for three prime time hours. They also do academic olympics, Native American powwows, “whatever is of greatest value to the market,” Hassler explains.

After proving the success of the live broadcasting formula on its own turf, BEK Sports approached other Dakota telcos to join forces in a network. There are now thirteen affiliates in the cooperative, each of which pays BEK a production fee to put their games on TV. They meet regularly to decide which sporting events to devote resources to. Then they go to work. 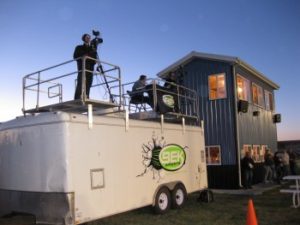 The sports programming – including live commentary, graphics and instant replay – leaves the production truck as an IP stream, which is plugged into the Dakota Carrier Network fiber ring, a fiber connection that links all of BEK’s partner telcos in the state. The signal is handed off to the DCN ring for transmission over their backbone, management through a TelVue HyperCaster at the headend, and then retransmission to the relevant local markets. “No bird in the sky, no satellite. Everything is over fiber. It’s a hardwired connection from start to finish. Now that’s a different mentality,” says Hassler.

Hassler’s approach to programming is strategic. Recognizing that it is impossible for a local operation to produce as much original programming as the national operators, he focusses on prime time, right after the evening news. “I’m not going to compete with the Today Show, Dr. Phil or Oprah, or the 5 or 6pm news. But when the news is done, that’s the market I own. In our market, with our teams, we are always in the top 3 in that time slot.”

BEK also finds local sports programming to be an advantage in selling to North Dakota advertisers. “The advertising base of North Dakota is the Mom and Pop stores, the local insurance agents – because those people are connected to the community, and half of them have kids on TV. The whole business model is so intricate and different than on the large market level.”

Hassler would be happy to share his experience with other aspiring telcos, based on the successes of his network. He thinks local sports and other relevant programming could be a lifeline for struggling smaller telcos. But management has to be willing to make the investment, both in money and effort.

“If it was easy, anyone would do it. But it is not. TV is an expensive business. It’s not an easy business. It needs constant attention. But we know this can work. We’ve proven it.” Hassler’s advice?  “If you can get over the initial hump of capital investment, you can keep your head above water. Find a way to reinvent yourself. Figure out what’s important to the people of the area.”