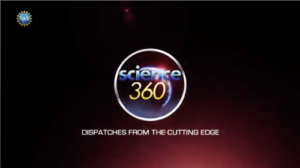 The National Science Foundation, one of the most popular program syndicators in the TelVue Connect Media Exchange, is re-packaging its highly-acclaimed STEM content as one-hour and half-hour Series, entitled: “Science360: Dispatches from the Cutting Edge”.

Each episode in this new series is a compilation of some of the NSF’s most requested news, features, documentaries and short-form programs about all things science, engineering and technology.

Cliff Braverman, who heads the Multimedia Group in the NSF’s Office of Legislative and Public Affairs, says these series were created with PEGs in mind: “With science key to addressing so many societal issues and impacting nearly every aspect of our lives, the National Science Foundation believes it’s essential we communicate science to the public. We see providing this programming to PEG channels as an innovative new way to share the beauty, wonder, relevance and excitement of science.”

Media Exchange members can subscribe to these NSF Series by Licensing the one-hour version here, and the half-hour version here. While each episode will also be available as a standalone video file, the advantage of licensing it as a Series is that every time the NSF uploads a new Episode, it will automatically show up in the Affiliate’s Media Library, ready for re-broadcast.