“Snipes” are automated on-screen messages that are most commonly used to promote upcoming programs on a TV channel, but can be used to display other forms of information as well.

The HyperCaster/ProVue combination supports the creation of “Snipe Overlays” through the graphics option that also includes on-screen “bugs” and “tickers”.

The difference between a “snipe” and a “ticker” is automation. While a “ticker” requires a message to be manually typed into the interface, a “snipe” will dynamically generate an on-screen graphic based on your choice of “date”, “time”, or “content” variables, such as the program and episode name of the currently running program or next scheduled program. Additionally, a ticker scrolls text across the screen from right to left, whereas a snipe displays text lines optionally on top of a custom image.

To create a snipe, you can start with a Preset Type (Top or Bottom). This will pre-populate a lot of the fields, which are then easy to customize to your specifications. Here are the choices you can make:

On screen, the default Top Preset for a Snipe could look like this: 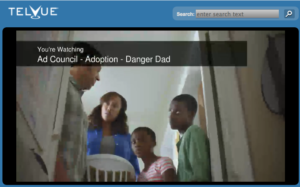 To display other information, for example the current date, you could enter something like “Today’s date is” in Text 1 field, and the following rules in Text 2: %a (for abbreviated weekday) %b (for abbreviated month) %d (for date) and %Y (for year).

Variables are populated at the time of starting a snipe. If any variable cannot be filled, for example if you use the Current Episode variable (&CURRENT_EPISODE) and the currently airing program does not have episode metadata populated, the snipe will not be shown and an error message will be displayed.

Once created, a Snipe Overlay can be scheduled, like any other graphic overlay, by choosing the “Add Overlay” option in the Programming → Classic View. You can also manually turn snipes on and off on the Overlays tab. Note that if you manually turn on a snipe, it will remain on-air until you manually turn it off.

Would you like a free consultation? Please submit your contact information here, and we'll be in touch.