A Series is a collection of videos known as Episodes. You can syndicate an entire Series through the TelVue Connect Media Exchange.   An Affiliate who subscribes to a Syndicated Series will automatically get new episodes as these are added to the Media Exchange by the Syndicator.

To create a Series:

1. Navigate to the “Series” tab

2. Click on “New Series”, and fill in some basic fields (screen left): 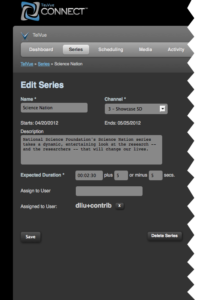 3. Save, and you have created a Series. But that Series is an empty placeholder until you assign specific videos to that Series as Episodes.

Fill the Series with Episodes

In the Series tab, navigate to the Series to which you want to upload new Episodes, select the “Episodes” option under the pulldown arrow on the right side, and you will see the upload interface: 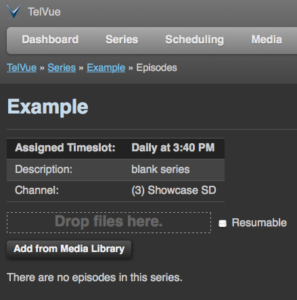 Drag and drop one or more videos.  If you want to create an Episode for this Series using a video that already exists in the Media Library, you can “Add from Media Library”, and it will take you to a list of usable Media.

(Tip: A useful filter on that page is the “Videos that fit this series’ slots” option, which narrows the choices to only videos that match the episode length for that particular series.)

Series can be syndicated by checking off the “Syndicate (share this series)” option in the Edit Series page.  In order to syndicate a Series, each individual episode must also be syndicated.

How to Syndicate Content to the Media ExchangeSyndication Reports