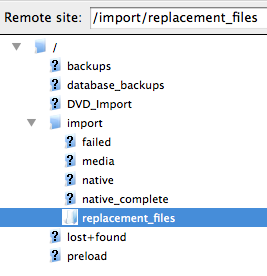 The “replacement_files” hot folder in the vol1/import section of your TelVue broadcast server allows you to quickly replace any file on the system with another, new file of the same name, without canceling any of its future schedules.  This is useful if you’ve had to revise a program, for example, and want to upload the newer version without the hassle of having to reschedule it all over again.

How is this done?  Once you’ve established the ftp connection with your broadcast server, you’ll see the “replacement_files” folder in the import tree of vol1.  (The import/media folder to which you normally upload new content will reject any file with a duplicate filename.)

The “import/replacement_files” folder, on the other hand, will import the media and automatically replace any file in vol1 with same name.  Every minute or so, the replacement file will run as a task, replacing the old file with the one you just uploaded.

The last replaced version is kept in the backups/replaced files folder, just in case.

As long as your schedule can accommodate the duration of new file, it will be replaced in the schedule.  If it’s a bit longer than the original file and another program blocks it, the schedule will expand to as much as it can, and cut off the rest.  If the new file is shorter, the remaining gap will be filled with whatever continuity you have designated on your broadcast server.

The media/import and media/replacement_files work slightly differently when attaching files to TBDs.

Also, once the TBD is created, media dropped in either media/import, media/replacement_files, or anything imported with a matching filename, will auto-attach to your TBD entry.  So be CAREFUL and PRECISE in naming your files!