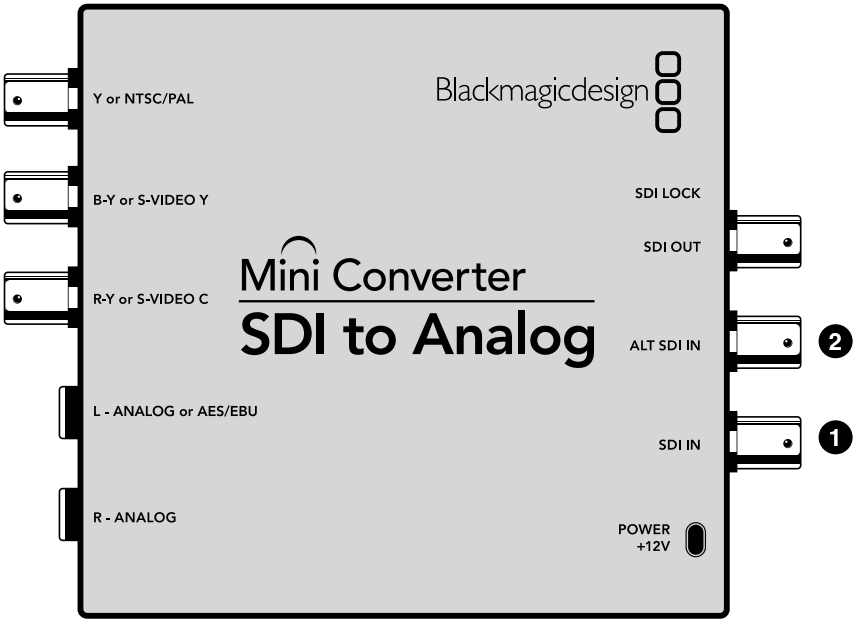 How Does It Work?

When using both the SDI IN (❶) and ALT SDI IN, the ALT SDI IN will immediately take over, should the SDI IN signal fail or no longer be present. The SDI LOCK LED will flash, indicating that the Mini Converter has switched to the ALT SDI IN. (In its normal state, the LED is solid white.) It is important to note that the failover will only occur if a loss of SDI input is detected. If a valid signal that is just black frames or freeze frame is present, that will not cause a failover. Dedicated failover protection switchers may be employed if you require more sophisticated failover detection.

If an InfoVue system is integrated with a playback server using SDI baseband via a HDMI to SDI Micro Converter, it’s possible to configure that as the auto failover source2. The HDMI to SDI Micro Converter has two SDI outputs (❶ and ❷), allowing for one output to feed an SDI input on the playback server and the other to provide a signal to the ALT SDI IN on the SDI to Analog Mini Converter. When an InfoVue provides the failover signal to the SDI to Analog Mini Converter, instead of disconnecting the SDI cable to the ALT SDI IN, you can reboot the InfoVue to force the backup signal to be lost and restore the primary source. If using an InfoVue Pro or Standard player for example, you can use the InfoVue Web UI to reboot.

If you would like to use a single source to provide the ALT SDI IN for multiple Mini Converters (multiple channels), you can consider using an SDI Distribution Amplifier to get multiple SDI outputs of the same source.

1Some systems include audio adjustment equipment or distribution amplifiers before cable handoff.

2Customer must also have SDI to Analog Mini Converter with ALT SDI IN. Some customers are able to directly feed SDI out of their playback system into cable equipment.

I am having issues with the overlays. They schedule but won’t play.On the “Edit Content” page, what does the “Private” checkbox, Location and Contributor fields define?