To get a pixel-perfect view of the templates you create in InfoVue that include dynamic data or video, you will need a preview player.  InfoVue Pro systems will ship with an InfoVue Stick which – when connected to any HDMI monitor – can be used to preview your playlists before putting them on your public channel.

To get back to the InfoVue Player, Reboot the system. There are two ways to do this:

Your InfoVue Stick Player is now ready to receive content. To create content, go back to the computer from which you login to the InfoVue management interface (https://infovue.telvue.com). Here is a typical setup for an organization with several channels, using the Pro (“Live”) Player for broadcast and an InfoVue Stick as a “Preview” Player: 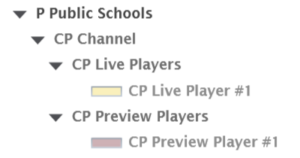 → An Organization can manage several Channels. Content at the Organization level can be SHARED among Channels.
→ A Channel can manage several Players. This is the best level at which to CREATE Channel-specific content and playlists.
→ Players can be SCHEDULED and UPDATED individually, allowing you to update your LIVE Player separately from your PREVIEW Player.

Players need to be updated whenever changes are made to templates, playlists, or schedules.

Would you like a free consultation? Please submit your contact information here, and we'll be in touch.