HD Conversion – A Tale of Many Channels

A year ago, MetroEast Community Media had a problem that many fellow PEG stations would envy.

The channels it administers for the eastern region of Portland, Oregon, were going HD. The problem MetroEast now faced was: how best to handle the transition?

Technology decisions fall largely on David Elkin-Bram, MetroEast’s Chief Information Officer. CIO is a new title; one adopted from watching his bailiwick expand with the evolution of digital TV, and now encompassing audio and video production, networking, computer and server management, as well as scripting and programming.

The Complexity of Collaboration

Before the transition could begin, there were many factors to take into consideration. MetroEast Community Media is actually one hub in a collaboration of channels.

“We are one of several facilities that share channels. We needed to be able to interoperate, with respect to getting signals on to shared channels,” says Elkin-Bram. Little towns like Fairview, Gresham and Rockwood are part of the county that MetroEast serves, and had to be involved in the decision-making. There were physical boundaries. There were different technical groups with different standards. All this had to be factored into the upgrade.

MetroEast programs six channels and administers another three. The routing involved was very complicated. Some of these channels broadcast shared programming. One is municipal, and carries meetings of unpredictable length. Another is on a very strict schedule. Sometimes a feed would be split, with different channels receiving different parts of programming. MetroEast delivers primarily to Comcast, but also to Frontier FiOS, which feeds all channels from a signal derived from the cable system. Comcast takes the IP signal. Frontier doesn’t yet take IP (though that is in the cards).

Elkin-Bram saw this as an opportunity to completely revamp the way MetroEast was managing channels. The multicasting capability of IP broadcast looked like a promising solution. “A Comcast Engineer had suggested IP as being more flexible, but also offered to provide dedicated fiber should we choose to go with HD-SDI fiber transceivers. The choice was easy, since the dedicated fiber would mean very little control over routing between Portland Community Media, MetroEast and off-site locations.”

That’s where the TelVue HyperCaster came into the picture. MetroEast was already a user of the previous generation of TelVue broadcast servers. When he began to consider transitioning to IP, Elkin-Bram studied the potential of using the HyperCaster to multicast, using a single web-accessible interface. Many of the other systems that did similar things (IP in and IP out) actually convert to SDI and back again. Elkin-Bram ruled those out as unnecessarily complex and expensive. Since MetroEast already had robust wiring, Elkin-Bram figured it made sense to use it for multicasting. “Almost everything in our system is multicast, so no extra SDI routing was required. It was nice to lose that. Rewiring for SDI made no sense, there was no reason to pull extra cable around the building.” Elkin-Bram had looked at the expense of a 32×32 SDI router, but the equivalent in a multicast-capable ethernet switch is about one quarter of the price. That was an attractive feature. The HyperCaster could move content around without altering the video signal. Once encoded in a certain format, it would be delivered that way. In fact the HyperCaster can decode to SDI, either via an integrated decoder or a downstream ProVue IP decoder. “We had a good network to begin with, so IP was our choice. It made the most sense, and it was the most flexible. It allowed us to go with the format we wanted.”

Chris Perry, TelVue’s Director of Systems Engineering, was closely involved in the build-out process. He says it involved literally dozens of iterations of the drawing. By designing around MetroEast’s unique workflow, the outcome would meet the kind of adaptability required by the collaborative nature of the network.

Perry describes the layout: “We had to make provisions and contingencies for a wide variety of input sources. For example: a college needs an encoder to transmit on a given channel. With multicast, the college can send to both Portland Community Media and MetroEast. Because MetroEast has final routing control, it can put that into whatever channel it chooses, and even broadcast over the Web, if necessary. We could seamlessly integrate all channels across the IP network. You don’t need 10 boxes, you just need one HyperCaster and switching gear. You get multiformat support, up- and down- conversion. The IP workflow is efficient and flexible. The whole system fits in half a rack.” 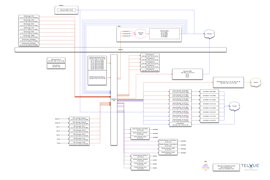 The system drawing went through many iterations

By mid-May 2013, the HD system was ready for a soft launch. “First we built a system that ran in tandem with the old system. When it was time to cut over, all MetroEast had to do was move one cable to go to the HD system. This allowed for the full suite of testing, monitoring and training with the new system without worrying about wiping out on the air.”

The entire HD transition, starting with video production, started several years before the broadcast upgrade. MetroEast producers had been shooting in HD for some time, but did not have a meaningful way to edit or broadcast in HD. Everybody who shot in HD would be turning their programs in to the station in letterboxed form. And the volume of programming is high: in any given quarter, the station gets regular submissions from 50-150 unique producers who create series programming.

About a year ago, MetroEast began upgrading remote locations. “There are several jurisdictions we serve, that share four locations; plus another site, where mobile production gear can be connected. We began our HD upgrades with new gear at our municipal locations, and have now completed updates to our client editing systems and our studios.” Elkin-Bram explains.

The HD conversion is not yet complete. At Comcast, the rollout is scheduled to take place, two HD channels at a time, over a period of several months. Frontier still delivers everything as SD. So there is still work to be done. But from the MetroEast perspective, their part of the HD bargain is done.