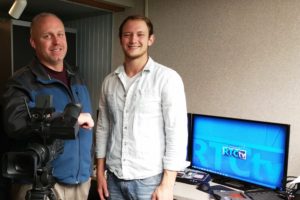 Imagine a town where the local TV channel gets more viewers than ESPN. That’s the case in the rural community of Rochester, Indiana (pop. approx. 6,100), where local sporting events, school programs, and town council meetings are the best show in town – and available only on the Rochester Telephone Company’s local origination channel, RTCtv.

“The viewership is that high because we are hyperlocal. See your grandson in a school program. Catch that city council meeting that you couldn’t make it to,” explains station Director Scott Sayger, who in a few years has transformed RTCtv from a bulletin board channel to a 24/7 slate of intensely hyperlocal programming. “We cover the school system more than anything. Sports, which everybody loves. School board meetings, choir, band concerts. And we involve students in our productions. I work with them on every aspect of video production, from script to shooting and editing.” 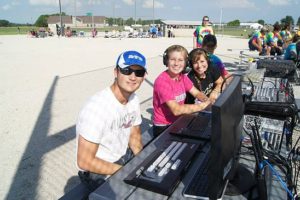 In June two of those students will be hired on fulltime, thus tripling RTCtv’s staff – to a grand total of three. “We’re pulling 120% out of each person.” With that, Sayger is looking to expand coverage even beyond the estimated 1,000 projects he has undertaken in the past year. He was growing his production capacity so quickly that a couple of years ago he realized the operation needed to graduate beyond the jury-rigged PC they were using to play out the old channel. That’s when he called TelVue.

“TelVue’s service and knowledge base were phenomenal. They’re the experts.” Sayger adds that when shopping around for linear broadcast solutions, “TelVue scored A+ in all categories.”

RTCtv now schedules and plays everything out of a B100 HyperCaster, on both the SD and HD tiers. “Scheduling used to be so time-consuming. The HyperCaster has made it so easy to organize our content into a linear schedule.”

To anyone who wonders whether it’s worth the effort to start a local channel, Sayger’s answer would be an unqualified “Yes. Hyperlocal content has extreme value. Some of that is monetary and some is historical. Advertisers who know and watch us think it’s one of the best buys in the market. But even more importantly, hyperlocal allows you to become a more informed citizen.”

Sayger believes that by involving and interacting with the community, television has not only proven its worth, but may actually be changing the way participants behave. For example, council members tell him they address the camera because so many people come up to them with questions based on seeing them on TV. “We have really been embraced by the community.”