Equipped for the Future 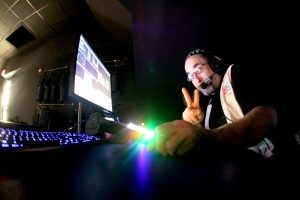 As an Educational TV operation, RETN (Regional Educational Television Network) is constantly looking to stretch the traditional PEG mandate beyond the limitations of traditional TV technology. Along with partner station VCAM (Vermont Community Access Media), RETN has not only moved to HD, but is also fully integrating the Web in its video distribution strategy. “The tools are changing. It’s a paradigm shift, even though we haven’t strayed from our core mission,” says RETN Content Manager Drew Frazier.

The core mission for RETN and VCAM in Burlington, Vermont, would sound familiar to any PEG aficionado: “Community involvement. And trying to draw from 12 communities around Burlington all manner of program sharing. And educating the community on the use of new media tools.” So says Scott Campitelli, Executive Director of RETN and the driving force behind the station’s transition to modernity.

RETN/VCAM have the advantage of operating in a state where PEG stations are well-known, watched, and appreciated. Vermont has the greatest number of PEG channels per capita of any state in the U.S. – 27 access centers, running a total of 45 channels – in a state with no more than 700,000 residents. “Politicians come into our access centers. Local government officials and legislators know the local access organizations and community media centers,” Scott explains.

RETN and VCAM are fortunate to be distributing over a local telco – Burlington Telecom – which operates a Gig network and had not only the bandwidth, but also the vision to grant VCAM an HD channel, with RETN planning to work with BT for another HD channel soon. VCAM’s HD channel launched this Spring, and RETN hopes to launch its HD channel by the end of the year. Being HD-ready took some careful research and planning. Scott knew they had to move off their aging Synergy platform. The station tends to do a major upgrade once every ten years, so several years ago he started looking for a system that would be a good platform to work from, well into the 2020s.

Drew Frazier elaborates: “We knew we needed a system that was scalable. We have two organizations offering full PEG services and originating 8 (soon to be 9) channels. We needed a robust system. We wanted a system that could accept all HD content and down-convert to SD downstream so the workflow wouldn’t have to continue creating SD/HD files for every program. We liked the fact that the TelVue HyperCaster was IP based. We have been following TelVue over the years and liked the direction the HyperCaster was going in.” The two stations ended up sharing a single TelVue B1000 HyperCaster to broadcast all their channels, with external ProVue IP decoders for the SD output that their other carrier, Comcast, still requires. 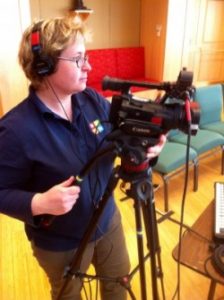 In moving to an IP platform, RETN and VCAM gained a lot of workflow efficiencies. “Early on, our master control did not down-convert, so we were spending too much time managing two, even three versions for every show that came out of post-production. It was very labor intensive, very inefficient. We changed our production over to HD three years ago. By investing in a system that could accommodate that, and catch up with production workflow, we eliminated all that extra work. Now we have only one version. We archive it, and drag-and-drop it over to the broadcast server where it auto-transcodes. We can upload that same version to TelVue CloudCast, YouTube, or Vimeo. The result was programs getting online in a few days rather than the longer turn-around.“

Not only are programs reaching the audience in a more timely way, but they are also reaching a bigger audience. The Vermont stations are banded together in a group called the Vermont Access Network (VAN), which among other things, helps member stations share programming. VAN created a program-sharing group called Vermont Media Exchange (VMX), and last year VMX moved on to the TelVue Connect Media Exchange platform, as a Private Group. “Now, things that come out of the state house can be available to anyone in the state literally that day, and the possibility of having multiple file formats all contributed and downloaded back out to all these different organizations with a huge range of technical facilities, skills, and staffing, has been a great step forward in a small state.“

Not all the program contributors are TV operations. With such easy access to production technology these days, access stations find their role shifting from center of production, to center of networking. “RETN is becoming more of a catalyst for local educational institutions to use video in more innovative ways. More and more organizations are doing their production work without even coming to the station.” Scott says that in response, RETN is taking on more of a “networking” role. “Some of our training is more about helping them understand how they can upload their own content to us, and also how to create video with different devices. We teach a graduate course in the summer for teachers; we have workshops on video production with iPads. We’re working on partnerships that are helping to push us and our partners in new directions.” 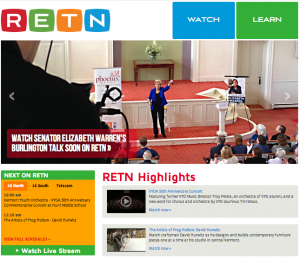 To facilitate collaboration, RETN recently revamped its website to make it easier for potential partners to submit video, no matter what format it’s in. For broadcast-quality video, that means providing users with electronic file-transfer options like an RETN dropbox or FTP connectivity.  For online streaming, that means building a website that accepts embeddable links from several of the most popular streaming platforms like YouTube, Vimeo and TelVue CloudCast. A lot of the groundwork for this Web integration was developed by the Community Media Drupal collaborative, whose main players are Channel Austin, Manhattan Neighborhood Network, and Portland Community Media in Oregon. Drew Frazier describes the new workflow as “circular”, where programming is ingested on the Web, goes through the broadcast system and ends back up on the website as publicly-accessible streaming video. The best way to reach the largest audience, he explains, is over the Internet. Burlington may well be Vermont’s largest city, but the area quickly becomes rural (and not nearly as well cabled) outside of greater Burlington.

Some examples of RETN partnerships: The University of Vermont’s Center for Research on Vermont has been a partner for almost 20 years. Traditionally their content was driven by lectures, but in the last academic year, they started producing short-format content, like 2-3 minute pieces on local research. Other contributing organizations, like the Gund Institute for Ecological Economics at UVM, have come to the conclusion in recent years that video is a valuable way to deliver information to the community.

Final word of advice on building community in this day and age? Drew says it has nothing to do with technology: “Over the years we’ve found that one very effective outreach to potential partners is… challenging them to a bowling competition.” Yes, bowling. Digital media is nothing, after all, without that personal connection.