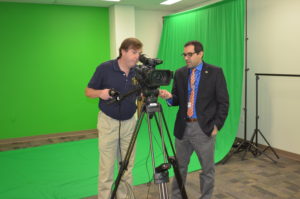 As a relative newcomer to government video broadcasting, New Castle County in Delaware is not weighed down by legacy technology, and has been able to leapfrog into the future with a completely cloud-hosted linear broadcast channel.

“That sums up why TelVue is great,” enthused Antonio Prado, Director of Communications for New Castle.  “Our IT people saw the merit of not having any broadcast equipment in house.” With no need for a broadcast server at the headend, Prado and his staff can operate the New Castle County TV channel (NCCTV) from any Internet connection, because their channel is managed inside the TelVue Hosted Broadcasting Cloud.

How does it work? New Castle County TV runs off a Virtual TelVue HyperCaster®, which offers the user-friendly HyperCaster broadcast management interface without the need to maintain any broadcast hardware on site. Video content is uploaded through the Internet to TelVue ConnectTM – a content aggregation and management system – for direct distribution to the Virtual HyperCaster (VHC). Live studio output can be fed via IP encoder –> up to the public Internet –> to the VHC. Community message boards don’t even have to be uploaded, since they are generated directly in the cloud.

It then becomes a simple task to arrange these different elements into a 24/7 channel, using the HyperCaster’s built-in drag-and-drop scheduling, plus the IP StreamThruTM feature that allows a programmer to schedule and switch IP events right in the VHC interface.

TelVue takes care of delivering the final VHC output signal to Comcast and Verizon. “Our long relationship with Comcast and Verizon paved the way for their acceptance of this innovative form of peering,” explains Paul Andrews, TelVue’s Senior Vice-President for Sales and Marketing.

In addition, TelVue delivers the NCCTV live streaming channel to Internet viewers through the TelVue CloudCastTM service, so viewers can watch directly from a web player.  Prado is currently building up a video-on-demand library as well, which will become accessible through the same CloudCast player.

Prado says the feedback from their viewers has been good. “We’ve run features on local Polish and African-American festivals, a weekly message from the Governor, Department of Safety events, and some shorter pieces.”  The station also has access to the TelVue Connect Media Exchange, a potential source of even more diverse programming. 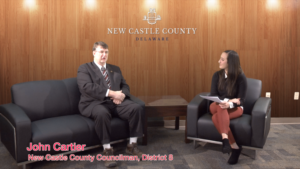 The migration to TelVue’s 100% Hosted Broadcasting solution began when New Castle County Executive Tom Gordon realized the government’s TV channel was not being used to its fullest potential.  Previously, NCCTV ran only bulletin boards.  Gordon realized the government could do a better job of reaching its constituents, and worked with Prado to build up enough local production capacity to be able to provide some real TV viewing to the NCCTV audience.

“There was a time this county had a local news channel and a PBS station, but no more,” says Prado, and the former newspaperman set about teaching himself everything he needed to know about video production, equipment, and studios. “My job was to realize Gordon’s vision.”  Job done.