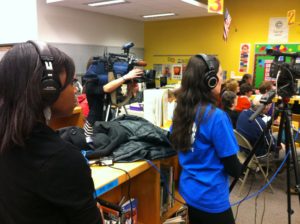 At the geographical center of Pennsylvania lies a unique consortium of government and educational institutions that have pooled their resources to fund C-NET, an access TV operation that serves a spread-out community.

C-NET is Centre County’s Government and Education Access Television Network. It administers a G and an E channel on Comcast and the smaller Windstream cable system, which together give C-NET a potential reach of 46,000 subscribers. The territory includes Penn State’s largest campus, surrounded by a fairly rural stretch of homes, many without cable TV service.

So when it came time to upgrade, C-NET was looking for – among other features – the ability to webstream in HD. They got that and much more with a complete overhaul to a TelVue system, including a HyperCaster broadcast server, CloudCast streaming, and the InfoVue digital signage system. Now C-NET can simulcast in SD to cable and HD to the web, reaching even more viewers via Roku set-top boxes. C-NET has embraced the era of social broadcasting — and were so happy with their new HyperCaster install, they tweeted it: 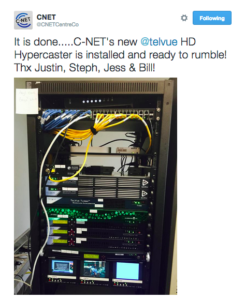 Executive Director Cynthia Hahn says: “My community is really thrilled that they can obtain embed codes, direct links, and can share programs on Facebook and Twitter. That means one of our partners can put a specific video on a local planning dept website, for example. They also love the fact that I can send them individual chapter points in a video. And I love having the reach of Roku available.”

80% of C-NET’s coverage is local meetings, some of them quite long.  The rest is comprised of Penn State lectures, festivals, forums, and roundtables. C-NET benefits from the ability to go live from any of 10 remote locations that can be switched through Comcast. Because they do not have a studio, nearly everything they do is field production, and that is staffed with a steady supply of interns from Penn State who rotate through and get college credit for working at the station. ”They work with us, learn to troubleshoot, and get professional experience.  That relationship with Penn State is very valuable,” says Hahn. 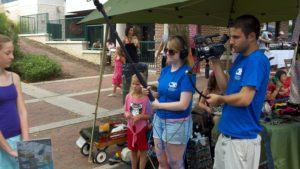 Hahn admits she is not a “tech person”, but feels that gives her more of a chance to focus on what her community really wants. When Hahn researched the upgrade of C-NET’s broadcast system, her primary consideration was to go with “a vendor that was always forward-thinking, that says ‘you need to get ready to do this’. That’s been my impression of TelVue for many many years.  If something was going to come down the pike, it was going to come from TelVue first. I wanted that.”

“TelVue products and services are in constant development,” explains TelVue President Jesse Lerman. “From our first, pioneering channel-in-a-box playback system, to IP workflows and cloud-based broadcast file sharing, TelVue takes pride in being a PEG broadcast technology innovator. We are pleased to be able make cutting edge technologies easily accessible and easy to use for our customers.”