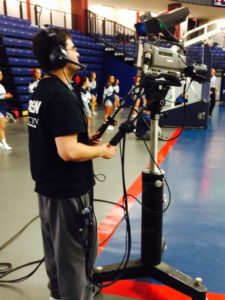 “Anything that’s well-produced, interesting, and has an “Aha!” moment — that’s what I call cool programming.  That’s what we want on Brookdale TV.”  This is the credo that keeps Cheryl Cummings focused on her responsibilities as Executive Director of the Brookdale Network at Brookdale Community College in Monmouth County, New Jersey.  The Network includes the educational access TV channel, the public radio station – an NPR member station – and the college’s performing arts center.

And that’s why we chose Brookdale TV as our station-of-the-month.

The amount of original programming produced at Brookdale TV is astounding, given that there are only three full-time employees and a few more part-time.  Take a look at the extent of the playlists of online video offerings.  Subject matter runs the gamut from basketball games to full-length Shakespeare productions, promos for the college, public lectures, and profiles of community members.

Even more important than the quantity of programming is the quality. Brookdale TV has to  be good because it is more than just a TV station – it is a vehicle for teaching the next generation of broadcast professionals how to make TV well.  Brookdale TV is closely integrated into the teaching curricula and support services for the Communication Media department, and produces features for nearly every discipline across campus: English, Political Science, Auto Tech, Fine Arts, Math, College Relations, Alumni Association, the Office of Business and Community Development, and more.

For example, Brookdale TV covers all Brookdale’s home basketball games, which are broadcast and streamed live, and then replayed the following week.  Sports are popular:  the Brookdale Men’s team won the National Championship last year, and both the Men’s and Women’s teams are ranked 3rd in the National Junior College Athletic Association’s (NJCAA).  In 2013 and 2014, Brookdale TV broadcast and streamed three full days of live coverage of the Region 19 Basketball Tournament, which was hosted by Brookdale College. Basketball games are fast and unpredictable, a real challenge for TV crews.  But that’s not a problem for the best students out of the TV department, who are hired by Cummings to cover the games, where they are guided and coached by BTV’s professional staff. 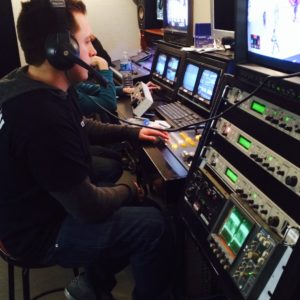 Sports programming is so well-received that it prompted college officials to start a brand new sports broadcasting concentration in the communications department. “The students will be integrated into all aspects of production,” explains Cummings. “We hope to cover all athletics by offering this course; we’ll have 25-30 students working alongside our professional crew – that’s enough bodies to cover it all.  The sports broadcasting program is not only a way to produce good content.  It’s also a great recruitment tool for students interested in pursuing sports broadcasting as a career choice.”

But Brookdale TV produces more than just sports.  Way back in the years before online courseware, the channel carried a lot of “telecourses” for distance learning.  Those courses have since moved to the Web, but Brookdale TV continues to extend the college’s reach into the community by covering visiting lecturers, dignitaries and celebrities such as Gloria Steinem, as well as renowned authors and poets in the Visiting Writers Series program. Additional programming is as varied as a very moving “Witness to Holocaust” documentary, alumni activities, and a new Culinary show featuring faculty and students within Brookdale’s Culinary program.

Brookdale TV also offers itself as a production house for non-profit clients, some of which have garnered awards, such as programs on the Monmouth County Library and the Monmouth County Parks system’s 50th anniversary.  Working with the local Jersey Shore Public Relations and Advertising Association (JASPER), BTV staffers have harnessed the power of good video production to win an advertising and public relations award.

And the best part of it all is that Brookdale TV shares.  Through the TelVue Connect Media Exchange, other access stations in New Jersey and the rest of the country can view and download programs and promos that are made by Brookdale TV for a larger, statewide audience.